Kyle Rittenhouse Trial Ends: Not Guilty on All Charges

On August 25, 2020, during Black Lives Matter riots in the small Midwestern city of Kenosha (WI), Rittenhouse and a group of armed volunteers were guarding a car dealership that had been torched the night before. After Rittenhouse put out a fire, he was chased by a rioter named James Rosenbaum, who reached for Rittenhouse’s AR-15-style rifle. Rittenhouse fired four times, hitting Rosenbaum and wounding him mortally. The shots also nearly hit Daily Caller journalist Richie McGinniss, who was covering the riots, though he was ultimately not wounded.

A crowd then gave chase as Rittenhouse attempted to flee toward police officers. He was struck in the head with a rock by an unknown assailant and kicked in the face by someone referred to as “Jump Kick Man,” whom Rittenhouse then shot at but missed. A rioter named Anthony Huber then hit Rittenhouse in the head and neck with a skateboard, and reached for the rifle; Rittenhouse fired one shot, killing him. Another rioter, Gaige Grosskreutz, who was armed with a pistol, raised his hands above his head, then charged Rittenhouse with his gun pointed at him. Rittenhouse fired, wounding Grosskreutz in the arm.

Rittenhouse broke down in tears as he shared how he was surrounded by BLM and Antifa rioters who were coming to kill him. Leftist Marxists like Lebron James and George Takei accused Rittenhouse of fake crying.

Suspected witness tampering was uncovered in the Rittenhouse case as star witness Gaige Grosskreutz, who aimed his gun at Rittenhouse, had charges dropped by the prosecutor only days before being a witness in the case. For some reason, Grosskreutz has not been charged as a felon in possession of a firearm and attempting to kill Kyle Rittenhouse, even though at the time of the event, Grosskreutz was a felon. In his long list of violations, Grosskreutz was arrested with his second OWI (operating while intoxicated) and a case was filed on January 21, 2021.  This was only a couple of months after he attempted to kill Kyle Rittenhouse. Read more...

The prosecution in the trial called Rittenhouse an “active shooter” and argued that the mob, full of “heroes,” had been “entirely reasonable” to chase him. The defense argued that Rittenhouse had acted in self-defense, in reasonable fear of imminent death or grievous bodily harm.

After having their entire case obliterated by video evidence and bombshell witness testimony all week – with some of the worst blows coming from their own ‘star’ witnesses – prosecutors for the state’s case against Kyle Rittenhouse finally came to the realization that their arguments had gotten them nowhere. Wisconsin’s Assistant District Attorney James Kraus acknowledged the slim prospects for a guilty verdict as he indicated the state’s intentions to switch out (move the goalpost) Rittenhouse’s current charges with “a multitude of lesser charges” for the jury to come to a decision on.

The jury in the Kyle Rittenhouse reached a verdict earlier Friday.

In September 2020, Joe Biden defamed Kyle Rittenhouse and smeared him as a white supremacist. 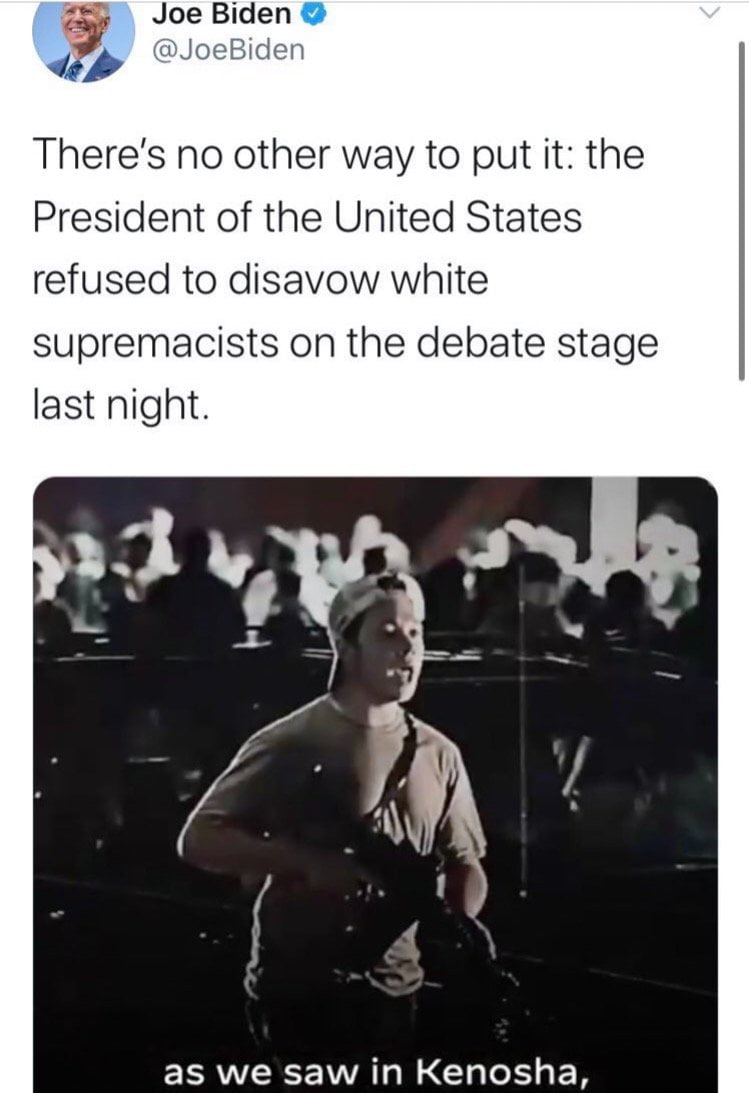 Kyle Rittenhouse’s defense lawyer Mark Richards spoke to the press after the decision and blasted Joe Biden. Biden and the left-wing media made this trial about race – Rittenhouse, a white teen who fatally shot two white men in self-defense, was smeared as a ‘white supremacist.’

“Biden said some things that I think are so incorrect and untrue — he’s not a white supremacist,” Mr. Richards said defending Kyle Rittenhouse.

NOW - Rittenhouse defense attorney Mark Richards: "Biden said some things that I think are so incorrect and untrue." pic.twitter.com/DLmHeKmHlW

The White House released a statement Friday afternoon from Joe Biden in which he says he is “angry and concerned” about the not guilty on all counts verdict. Biden avoided answering whether he stood by his calling Rittenhouse a “white supremacist” a year earlier, instead saying he stood by the jury verdict:

“Look, I stand by what the jury has concluded. The jury system works and we have to abide by it.”

V IS FOR VACCINE: CNN and Sesame Street host town hall encouraging kids ages 5 to 11 to get vaccinated

Something Really Strange Is Happening At Hospitals All Over America

DELTA + OMICRON IS AN ANAGRAM